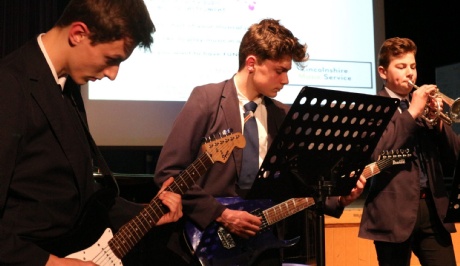 A great way to start enjoying the longer evenings...

Last night saw the Music department hold their second concert of the year in the school hall.  In front of a large audience, an equally large amount of students took to the stage to provide a fantastic evening of musical entertainment.

Every year group was represented, from Year 7 all the way through to Year 13.  New groups were premiered such as the Brass ensemble led by Corey-John Genovese and new soloists including Alexander Simpson, Brandon Gibbins, Dylan Barker-Smith and Samuel Hearne.

Every student that performed, whether in a group or as a soloist, put in many hours of preparation both during school time and at home. Their hard work paid off as could be seen in the quality of the music delivered.

Well done to all that performed and created such an enjoyable and memorable evening.

No comments have been left yet.