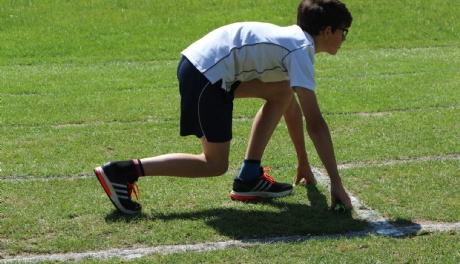 In addition to the pleasing levels of team spirit, resilience and commitment of the students, we saw a number of stand-out performances too.  Highlights included:

Go to the Gallery for pictures of the action!

The inter-house competition was closely fought, with the lead changing place several times throughout the day once again between Hobson and Johnson; the former prevailing by just 12 raw points.

From each event the top six competitors accrued ‘raw’ points (6 for first, 5 for second etc).  Then at each Year group interhouse points are awarded based upon position – i.e. the highest scoring house in Year 7 get 12 interhouse points, second 10 interhouse points, and so on.  A summary of the scores can be found below, and a complete breakdown of the results from each final can be found on the VLE (Subjects > PE > Interhouse > Sports Day).

We would like to extend our thanks to a number of people for making the event so successful. Firstly, the competitors for their efforts and collaboration throughout the events.  Secondly, the officials who helped measure, time and record results so accurately; many of these were our Y12 Sports Leadership and A-level students.  The site team who prepared the facilities so well, and to Mr Evans, Mr Colwell, Miss Smith and Mr Harris, who helped with officiating throughout the day.

We look forward to another fantastic competition next year.