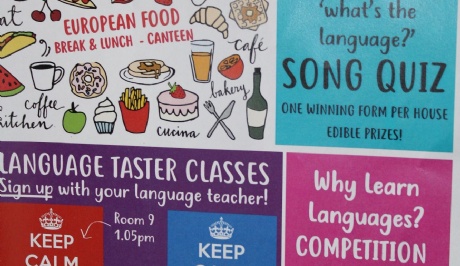 A recent poll revealed that a quarter of British holidaymakers feel nervous at the thought of having to speak the local language when they go abroad.

The Russell Group of universities said that a fall in the number of students studying foreign languages is concerning.  The group's director general Dr Wendy Piatt has said that Languages are vitally important to the UK if it is to be fully engaged with the world.

The head of schools programmes at the British Council, Mark Herbert considers that having more of us being able to speak at least a little of a foreign language is good for the UK's long-term competitiveness in the increasingly globalised world.

The Association for Language Learning adds that learning a language is not just important for education and skills, but also for the economy, security and community relations.  It is crucial to emphasise the importance of language learning and its unique contribution to broadening our minds, our awareness of cultural differences and appraisal of misconceptions.

It was therefore fitting that Spalding Grammar School should celebrate the importance of learning languages on Tuesday, the European Day of Languages.  This turned out to be a fantastic event, thanks to the hard work and organisation of Miss Dungarwalla and the rest of the MFL Department.

On Friday, Year 10 had the pleasure of listening to Mr Paul Hughes who visited the school to talk about the importance of learning languages.  Paul is a multi-lingual (Russian, Arabic and Pashto) former Royal Air Force Air-crewman and now Managing Director of his own Research Company. During his military career he predominantly served on operations that concentrated on the Middle East, North Africa and Afghanistan; including a high profile secondment to the United Nations Special Commission (UNSCOM) in Baghdad as a Weapons Inspector and Interpreter.  His stories today were certainly motivational and highly entertaining!

Finally, I will add that I participated (or at least attempted to!) in the Polish lesson on Tuesday which was brilliantly led by Wojciech Such in Year 10.  I wasn’t his most promising student, but we have set ourselves a target for him to teach me to say a Polish tongue-twister by the end of the year!